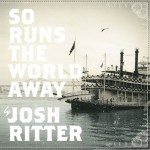 Five or six years ago, Sarah Harmer came to St. John’s. She was touring with a brand new cd and played a pile of dates across Canada before ending here in town. This was delightful news until I realized that the concert date was just 2 days after I was to leave for Canada’s North.

I was disappointed to have missed an opportunity to see Sarah Harmer, but even more dismayed months later, when I realized that her opening act was then unknown Josh Ritter. Just on spec, I decided to give him a listen, figuring if he was good enough for Sarah, he was good enough for me. It turned out that Ritter’s Hello Starling and Golden Age of Radio became the soundtrack for an incredible trip, and a largely formative period in my life.

The process of becoming the person that you are happens only once. It feels really nice to have a collection of songs to remind you of all the little steps in the middle.

Even listening to Josh’s new record, though it wasn’t with me at the time, takes me back to the same place.